For You A Thousand Times Over

“You never know when you’re about to meet someone important. It’s not like life gives you a warning. You just look up, and there they are.”
-Ted in ‘How I Met Your Mother’-
And this I took to heart, it was something worth more than keeping in mind. Barney is legendary but for me Ted is the man, an imperfect one at that, and that is something which makes him hell adorable. Speaking of marriage, all my life I have held this idea that more often than we notice we end up being with people who are better called ‘Fillers’. You know the sort who come, stay for a while and go. Apart from them at various stages of life - school, childhood, neighbourhood, town, college, work, parties, gatherings, over the internet, travel, trips or somewhere on the road, well at times as simple as that we bump into some ‘special’ ones too. And then we end up believing in ideas like sharing the same wavelength, my type, sent from heaven, made for me, one in a million, the love of my life etc. Yes we do. For some of us this happens once, and for some again, again and all over again. Lucky are the latter, luckier the else. And the luckiest are the ones who get to marry them.
On a surprising but realistic level you will observe that most of us mortals have an absurd concept about marriage, accordingly this falls in two categories- LOVE or ARRANGED. Love if you find your soul mate, arranged if your loved ones find him or her for you. When I began this post I feared of being diplomatic. If I have to compare and debate upon the two, I do not know if I can choose a side. The reason being this, personally I am not yet in that phase. What I have seen, heard and experienced  is this, we live in a very imperfect world and in an imperfect world there can be no perfect match.
Marriage in my dictionary is more than an institution or what is blindly called an union of two souls. Whoever says so, go get some life. Choosing to live the one life that you have with an another human and that to the fullest, ah wish it was that easy! You require gravity to stand on the ground, you require gravity to fly in the air as well. Love before marriage is like you are right up there, and after marriage it keeps you strong on your feet. And for heaven’s sake, the opposite of ‘arranged’ is not ‘love’, it is derranged which love surely is not. Therefore it is justified enough if you have your own perspective. I choose to have mine.
So what makes us live together or love each other with all the similarities and despite all the differences? Why would we want something which we already have or why would we be okay to have something which we did not think of having at the first place? Why would we like someone who already has so much of us or why would we like someone who is so unlike us? And which is better, finding one such partner for yourself or letting others find for you? This is a tad bit confusing, but you will only be able to appreciate the taste of this cake if you bake one for your own.
I would say it all depends on whom you are willing to deal with, someone whom you think you know or someone whom you think you will eventually know. Either way life is all about making that big attempt. At the end of it all what matters is how many times you give yourself ‘wholeheartedly’  to that one person, over and over and over. The rest is secondary.  That’s what a marriage is all about. After my parents, these Banaras dolls were the first couple I knew, and whatever I think of marriage now is partly because of the number of times I have made them marry each other when I was a kid, of which I have frankly lost count and that explains their straight face ;-) 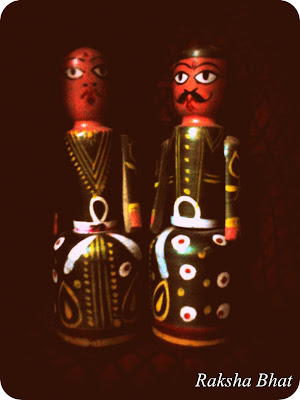 -R.
PS: This post is written as a part of  Indiblogger- Love Marriage Ya Arranged Marriage
Posted by Raksha Bhat at 10:04 PM

here have a look at this one too whenever you get time :) do promote on indiblogger also if you like it :)

Raksha Bhat said...
This comment has been removed by the author.
Wednesday, 22 August, 2012