THE SKY IS not THE LIMIT..Heaven is not a place..it is not a time..Heaven is being PERFECT!!! 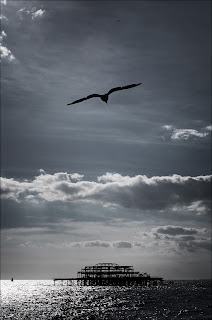 I had not heard of Richard Bach until I read a book called ‘JONATHAN LIVINGSTON SEAGULL’. The book hardly takes an hour to read but left me enlightened for a lifetime..87 pages and each page made me awestruck, the beauty with which the author has crafted the desire of flight and crave for speed in Jonathan, the seagull is commendable.
The author dedicates the book
“To the real Jonathan Seagull,
Who lives within us all.”
such is the greatness!
For most seagulls food is important than the flight, we humans are no different; we spend all our lives behind fame ,success and money and forget that our journey is more important than the destination.
But Jonathan was different...
he believed "There is so much more to learn"
His parents asked him be normal like the other gulls, he tried hard but he was happy hungry and learning!
He had the joy of gaining the record setting speed for gulls, one day he loses control of his wings and gets carried away and smashes down on the brick red sea, he learns his limits but does not give up. He then decides to fly in the dark ,he tries to fold his wings and make them short like that of a falcon and fly against the wind, he practises but under control. He finally reaches the Terminal Velocity, a breakthrough for the flock!
“How much more there is now to living..there is a reason to life!We can lift ourselves out of ignorance,we can find ourselves as creatures of excellence and intelligence and skill.We can be free.We can learn to fly!”
Jonathan was shunned by his fellow gulls as they believed he was against the rulebook, they made him an outcast for his irresponsibility. He did not care, he was not sad for his solitude but for the other gulls who refused to open their eyes to see. He learnt new techniques and skills of flying,he was not sorry for the price he had to pay.
“Boredom and fear and anger are reasons that a gull’s life is short,and with these gone from his thought,he lived a long fine life indeed.”
And one fine evening he got an opportunity to fly with two star bright gulls,he had finished one school and time had come to begin a new one. He reached HEAVEN. He was with magnificent birds who believed wings are meant to reach perfection not just to fight and find food. He learnt more, he realized this was not Heaven, Heaven is to touch perfect speed, it is not a limit, perfect speed is being there!
His instructor Sullivan once told him,
“Hundred years goes to learn that there is such a thing called perfection and another hundred to get the idea that our purpose of living is to find the perfection and show it forth..we chose our next world through what we learnt in this one. Learn nothing, and the next world is the same as this one, all the same limitation and lead weights to overcome.”
The elder gull Chiang taught him how to fly as fast as thought, to anywhere that is! To fly the past and the future…and to fly up and know the meaning of kindness and love. As he learnt he realized his fellow seagulls down on earth need help, he knew now that he was not mere bone and feather but a perfect idea of freedom and flight, limited by nothing at all!
He came back on earth to find his disciple, Fletcher Lynd Seagull, a perfect flight student. Three months later he had six students, all outlaws. All of them practiced hard and finally time had come to go back to the flock, eight of them flew in a double diamond formation to the council. Everyone wondered from where did they all learn the strange art, days later Fletcher too had a new set of students! He hit a rock one day during his flight but still managed to survive and left his flock startled. Jonathan ,his instructor advised him to get back to his flock and teach them to fly free,he told him to love the bird mob, and help them see goodness in themselves,build Heaven. Saying so Jonathan vanished into empty air. Fletcher began his task..no limits..his race to learn had begun!
Thank you Bach for an inspiring book!more than overwhelmed!
Ring the bells that still can ring
Forget your perfect offering.
There is a crack in everything,
That's how the light gets in
RAKSHA