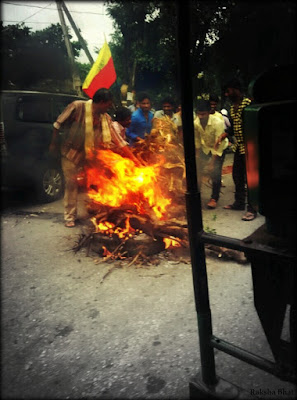 Water Water burning bright,
In the States of this fight;
What mortal hand or eye,
Could decide your flow?

In what distant deeps or skies.
Burnt the fire of thine cries?
On what fields dare they grow?
What the hand, dare can plough?

And what court, & dam wide,
Could twist the sinews of thy tide?
And when thy valleys go dry
What good strike? O’ Nature my!

What the people? What the pain,
You do ooze through their vein?
What the dispute? what lost cause,
Dare these futile fickle laws!

When the spring ebbs underground
And water’d this earth love bound
Did you think of this day to see?
Did you descend the hills to get free?

Water Water burning bright,
In the States of this fight;
What mortal hand or eye,
Could decide your flow?

-Inspired by William Blake's 'The Tyger', for my city Bengaluru is burning bright today :-(

Of Grass And God 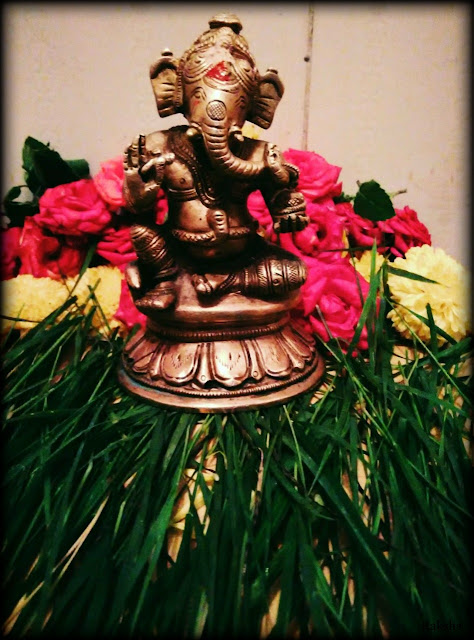 When there is a festive occasion at home and my folks are busy putting things in order I have this habit of asking questions about the procedures that are being followed so fervently. They always answer them with a lot of patience, accepting or refuting their explanations thankfully is up to me. Today is Ganesha Chowthi, the fourth day of Shuklapaksha of Bhadrapada celebrated with much grandeur across the country to honour Ganesha's birthday, and like any other Indian God he has his special requirements. Twenty one seems to be his favourite number. Twenty one names, twenty one flowers, twenty one leaves and twenty one sit ups. I had returned home from the hospital this morning and the first thing Amma reminds me to do is this customary exercise, so holding my ears with crossed hands and reciting this sloka I began.

Up and down, twenty one times!

I asked looking at the fresh green grass that was offered to him and as always was thinking of something else.

“Governments rise and fall, machines rust away, great buildings crumble, but mountains still stand, rivers flow to the sea and the earth is clothed in grass and verdure. Nature gives. And takes away. And gives again...”

So writes Ruskin Bond in his book‘The Book of Nature’. And here we were offering the same grass to God. A friend of mine had opined over a conversation just yesterday ’Nature is God’ and that echoed strongly now.

There are two versions to the story behind Ganesha’s special liking towards this grass. Apparently an Apsara in heaven wanted to marry him and she disturbed his meditation, he declined her proposal and in return she cursed him. He started having some burning sensation on his forehead and this grass came to his rescue. The second story is more interesting, Ganesha devoured a demon named Analasura who was troubling Yamaloka. This demon had the power to emit fire, so when he ended up in Ganesha’s stomach he gave him hell of a time. Thousands of sages offered this grass to Ganesha which reduced his discomfort. And therefore it is concluded that if you were ever to give Ganesha one thing, it has to be this ‘Garike hullu’.

Mythical I know but this was not what Amma told me today. She looked at me with some sort of amusement, it was more than the gratification she got because I was listening to her like every year.

“Hmmm…because he has an elephant head right and elephants are herbivores…they love eating grass…what Zoology have you learnt in school Oppi! Now go eat the Kadubu I have made!” she said and continued her effort to please Ganesha.

She heard the conflict in my head, maybe.