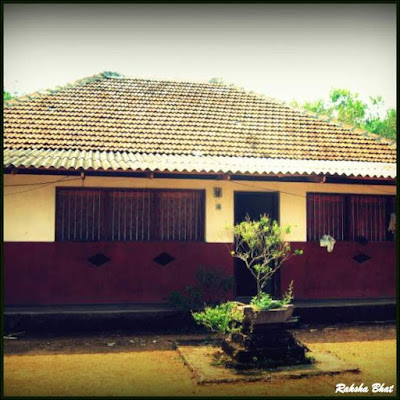 Eliya, this house has a couple of entrances apart from the main door that one can see here. Once upon a time there was this man in his eighties loitering around the katte which is built all around the house, a little elevation or a bench to sit is called so in Kannada. The summer heat of coastal towns of Karnataka ensure that one stays out of the house, sweating yourself out in the sun is better than getting fried like jackfruit chips in a pan of coconut oil inside the four walls. Fit and fine, dhoti clad with a walking stick but very much unlike Gandhi, this man, my Eliya Ajja was a man of swear words. He would walk from one door to the other looking for something outside or eagerly waiting for someone to come. If we were at one door wanting to go out we would find him there, thinking of not to trouble him we would move to the other, lo and behold he would be standing there too tapping his walking stick on his shadow on the floor.

“Acha bagilinda hogu”[Go through the other door] he would reply.

Go to the other and he would be there again.

“Ajja!!!” we would scream our lungs out.

“Entha upadra ningaladu makale!“ [What trouble you give me kids!] he would shout back with a 'nayi inde mone' [son of a d** in Malayalam] and continue to stand there. 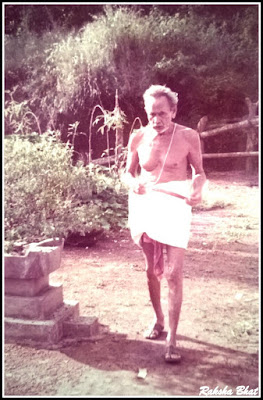 As far as I know Ajja was not much into reading and writing, knowledge during his days was beyond all that. So when I thought of letters and books of mysteries of life my ancestors have left me only one person came to my mind. And it had to be him, my Ajja, a man of shadows. There is this interesting story I have heard during night time from his dear wife, my Ajji with whom he has had the best of arguments and also his life. She would always add this nice prologue.

The story would then begin.

Dakshina Kannada is a land of ‘Adike Thota’ [areca nut farms]. Monsoon skies and greenery, mango trees and sunshine, peacock calls and tender coconut water, cashew fruits and small rivulets, ah! This experience deserves another post. Well Ajja being a farmer took the best care to ensure he had a decent crop every year. There were a couple of servants in the thota working for him; ‘Aalu’ as they are called, of course the caste system is now abolished. This incident was to do with one of them. Areca nut markets were in rich business during that time, and where there is money there is bound to be some theft.

On one dark night Ajja was out for his rounds guarding his thota with his ‘bedi’ [rifle].
Apparently he heard some movement, thinking it was a ‘kudka’ [wild fox]

who was a frequent visitor to his thota at night he pulled the trigger and fired a shot in the air. Far away, he heard a noise, like the deep ripping growl of a thunder. He walked some distance, after only a few lapsed heartbeats he understood someone was hurt and wailing. It was one of his ‘Aalu’ Rama, he was shot dead. Ajja thought he was probably there to steal some areca nuts like he had done previously, unfortunately it was his bad day and he paid a heavy price. Not knowing what to do Ajja pulled him into a cave, he hid his body behind the bushes and returned back home. The next day, Rama was not to be found anywhere and news spread. "Rama has run away to the ‘Ghattas’ " so people were told and thought, it usually happened with Aalus during those times, they would run away in search of work to the Western Ghats and beyond.

The story would end here, and life continued.

What Ajji narrated is something hard to believe. I wonder how much of this is true. Ajja was a hero definitely but how can anyone escape a murder even if it is accidental? Or is it possible for a man as frail as an old areca nut tree himself to do this?  Look at him, look at the picture. Can it be him? Did Rama really die? Or did he run away? This kind of furtiveness is interesting, it does not let me move on. It has been years now since I heard this story, as a child I did not think much of it. But when I visit my uncles at Eliya now, I think of whatever Ajji told me. In the lull of the noon when Ajja’s clock is ticking or when the rest of the house full of his children and their children are gorging on telavu [dosa made of rice batter] with kai[coconut] chutney or when the raindrops fall from the edge of the roof at night  I become aware of the voices coming from somewhere up. It feels like Ajja wants to tell me something.

I wish he wrote down something somewhere about what exactly happened, about Rama, about his escape and most importantly how did he feel about the entire incident. I wish there was a letter or a diary. Such thoughts compel me to search the atta[attic] or the old cupboards and trunks hoping that there is something. I do this every time even now whenever I visit Ajji mane. On the flipside I am sure Ajji is up there somewhere watching me and laughing ;-) After all what is life all about? You and your loved ones, little mysteries about each other, some truths and lies, some stories and experiences, some memories and moments, some learning and sharing, some love and hate, some satisfaction and guilt, sometimes just being there for each other and living your life to the fullest. I wish this was all in a letter or a book. Their funda of how they went about doing it so graciously along with raising nine children! That would definitely not be any cock and bull story. I would be the happiest if these beautiful mysteries are revealed and that would be my higher calling to follow and live by.

Love and miss you both, two of my most favorite people in this world. 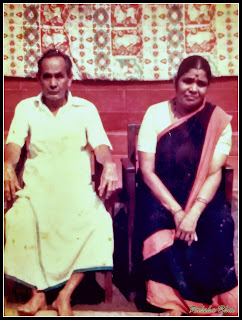 The best love story is not about
Romeo and Juliet who died together,
but of Grandpa and Grandma
who grew old together :-)

PS: I am participating in this creative activity organised by makers of The Path of Zarathustra in association with BlogAdda.

As Kids See It 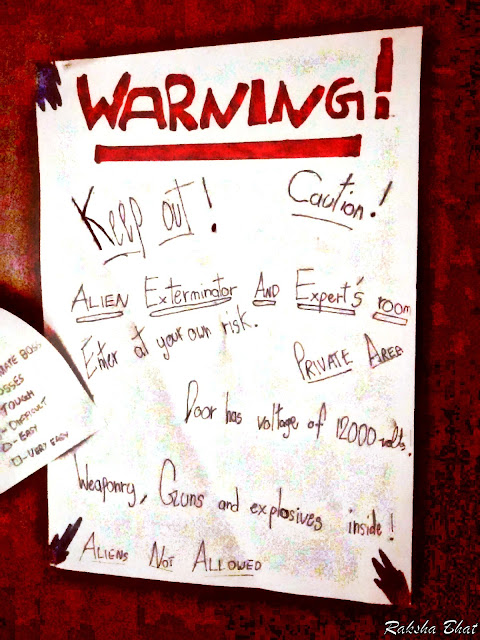 There is something specially striking about this signboard. Isn’t it more inviting than it is supposed to be? This is on the door of my 11 year old nephew’s room. I was compelled to enter after seeing this. Fortunately I survived the voltage, the weapons, the guns and the explosives ;-) It completely overwhelmed me, this level of imagination. Perhaps because it reminded me of what I put up on my room door when I was a kid. Thoughts were simple back then, a Winnie-The-Pooh or a crayoned flower would do.

Kids these days have exposure to a lot of things unlike the medieval times I belong to, and this little fellow seemed nothing short of a genius to me when I had this inspiring conversation with him this afternoon. It deserved a write up on this blog.

“Do you really have them inside your room?” I asked him and chuckled.

“Haha Raksha Chikki, you don’t know that much also?” he questioned me in return and jumped on his bed doing his typical antics.

I looked at him with amusement.

“You think I am Yakub or what, I have to become like Abdul Kalam to make some super strong ones!” he said adjusting his spectacles and grinding his bunny teeth.

I am a proud aunt today. Sometimes we don't need treaties and conventions to make this world a better place. If we make sense, a sense which helps us know what is right and what is wrong it will eventually make peace. A kid sees something what we adults don't.