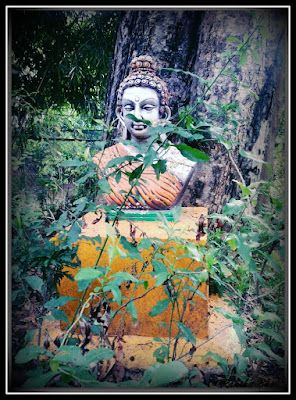 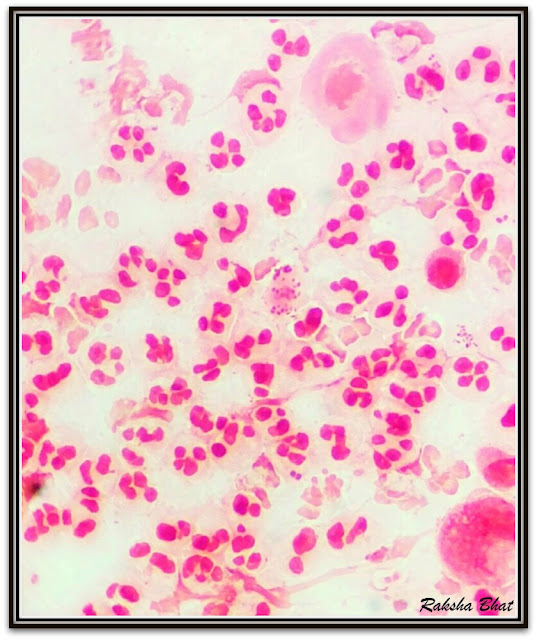 "Can you tell me what is that you find in this picture?"

I asked a dear friend of mine today who unfortunately but willingly did not get into medicine years ago.

"At two places there are smaller particles than the rest, little above the centre..." he replied.

"Not bad! Gonococcus inside pus cells, that's from urethral discharge" I said in excitement.

"They are heat fixed and dead!Don't worry" I said and reassured him.

"See I would have made a good doctor" he opined with pride.

Of course he would have, life is all about the choices we make isn't it. There are moments when I screen these slides for minutes together and miss some fields which would have led me to some important diagnosis. And then there are moments such as this when I know what I find under the microscope is going to change someone's life. There is no satisfaction greater than that, therefore I go from one field to the other, to another and finally end up with a stiff neck!

It is an interesting world out there, in and around the cells.How our body interacts with the pathogens is a beautiful science. What you see in the picture are intracellular organisms, imagine our body mounting an immune response and trying to engulf these little bugs, things inside are more dynamic than we know.

Posted by Raksha Bhat at 9:14 PM No comments:

This year I am trying to be a voracious reader, a little diverse as well.I decided to stop all the English Vinglish and start something in Kannada last week. A lot of people had recommended me this book before. 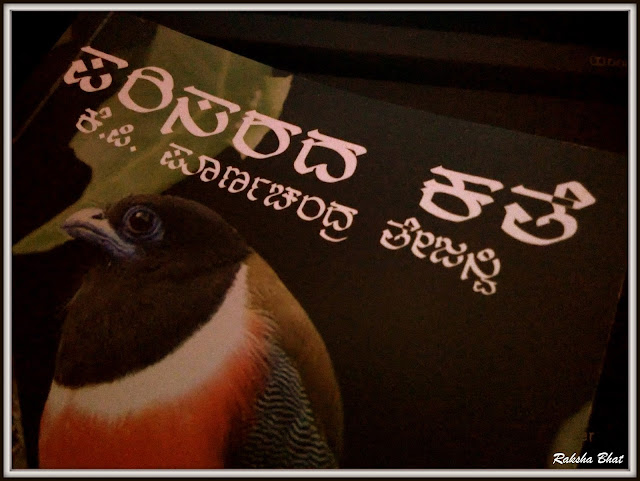 I am not yet done with the book but so far it has been a great read, usually people write reviews when they finish reading the book but I felt like talking about it today for a different reason. While I flip from page to page I am realizing how much I have missed reading Kannada all these years! Thankfully I can do more than just manage! We Indians are blessed with wonderful languages and we rarely do appreciate our own literature.It is enormously commendable, isn't it?  I have realized my fault, have you? Do share any must reads that you know of ,I will be happy to read :-)

The Lord, The Teacher 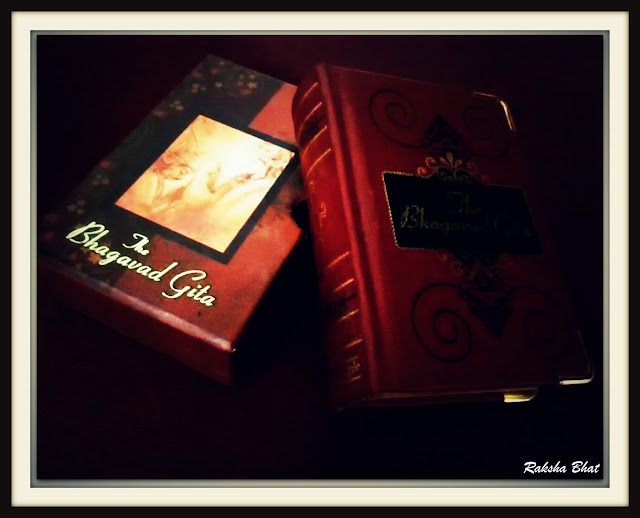 'Krishnam vande jagadgurum' is so apt for today. Read the Bhagvad Gita and you will agree, there  is no better teacher than the Lord himself and no better teaching than the Gita. It makes absolute sense, not mere coincidence. It is up to us to imbibe it all and be a good student. Here is wishing you all a Happy Janmashtami and to all of you who have taught me a thing or two in a way or the other, over the years here at my blog, a Happy Teacher's Day :-)

All I want to say right now, I feel awfully ashamed of being a human.

Rest in peace Aylan, you have not gone anywhere,
you are definitely in a better place wherever you are now!

Perks Of Being A Non-Malalyali Medico! 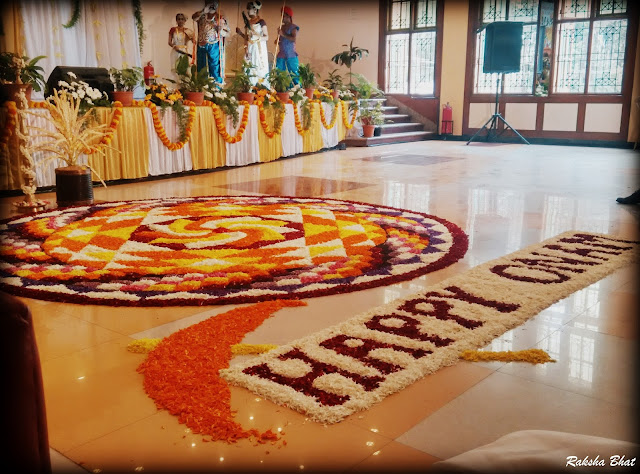 Celebrating Onam definitely is one, on the other hand no matter how hard I try Malayalam will remain a language that is impossible to learn in this life. My 'endaveno' is more like' gindaveno'.  When two Keralites are in  deep conversation I stand looking at them wide-eyed and all ears, I try my best to understand and all I get is the speed, so commendable! Every word sounds like a palindrome from all directions.The real problem according to me is that lip reading never works here, all because the tongue is on a roll. Funnily this happens every other moment if one is working in a hospital for reasons known ;-) 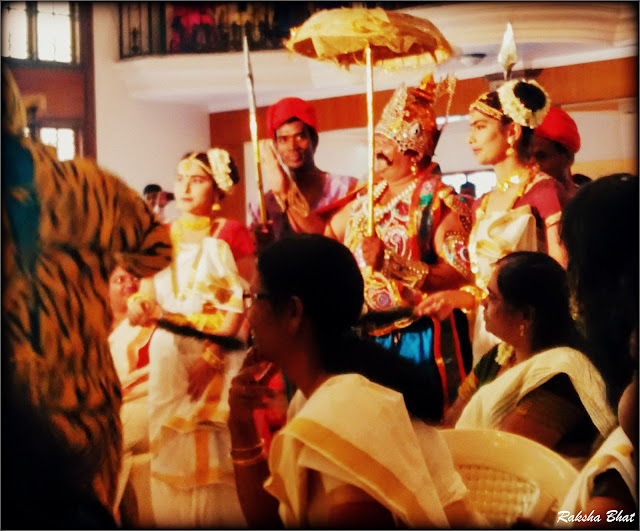 Enters Mahabali- apparently he is one of our ambulance drivers who was sporty enough to wear this royal costume, he has been doing this for the last 9 years!

What also happens during the festive season of Onam is the grand celebration by the staff nurses. We at Apollo Hospitals, Bengaluru celebrated Onam today. Our nursing director mentioned an interesting fact " If need be a Keralite may even sell his property to celebrate Onam!" she said. The crowd burst into peals of laughter on that. On a serious note what is admirable is the sense of commitment that they show to their rich heritage and culture even today,when you watch it your heart swells with joy and pride. 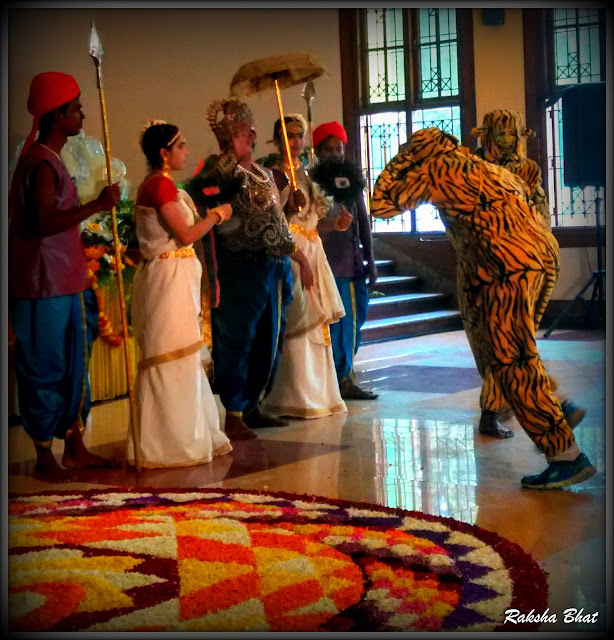 This spirit is totally infectious; the flowers, the colours, the dance and the music can keep one blissful for weeks. I have never witnessed such elaborate preparations and attention to details during any festival ever. So many songs and dance forms, stories and decorations, Pulikali and Mahabali, boats and oars, sarees and dhotis, bananas and coconuts, flowers and lamps, Kaikotti Kali and Kathakali. The list is endless, and ofcourse who can forget the Onam Sadya, slurp! 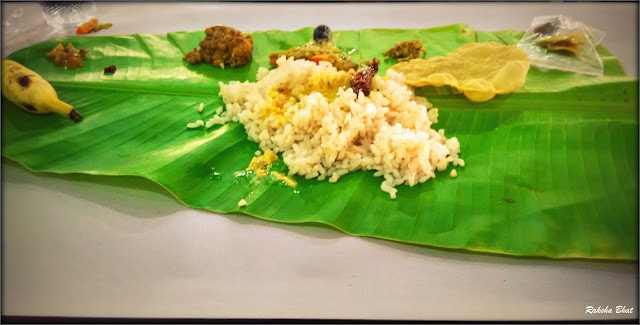 Sorry I could not share this sumptous lunch :-( I am sharing a video of one of the dance forms-'Thiruvathirakali' which was performed today, such pose and grace, even that's a grand treat to watch :-)

"There are some atypical cells probably" said the pathologist.

The doctor was worried, it was his wife's PAP* smear report after all. After a brief discussion they both decided to go for a Human Papilloma Virus detection just to ensure that the picture does not turn out to be bad. He walked to another section and spoke with the Microbiologist regarding the case, the investigation would be outsourced from there to another laboratory which carries out molecular diagnostics.

A couple of minutes later.

"What sample is required for HPV-PCR** pa?" he called the microbiology laboratory and asked.

The doctor billed for a HPV-PCR test from the billing section and sent the sample from the sample collection centre as told.

The EDTA vacutainer reached the laboratory through the house-keeping. Another technician received it and took a printout of the worksheet and kept everything ready for the test to be outsourced.

Now one may wonder what this is all about and what happened after that.Let me tell you what the final report was:

Hepatitis B Virus- Not Detected

Eh? B or P, what is in a letter? Definitely a great raise in Blood Pressure! I did fall of the chair when I heard this. Everything is pretty much kicked to Pluto if there is a miss or a change, especially in a health care setting when this happens it is not at all pardonable. I am sharing this because it is a necessary learning, unfortunately I wasn't around when this happened. I heard various versions from the technicians regarding this matter, what I understood was the kind of miscommunication that happen over telephonic conversations. The doctor called asking for HPV, the technician heard it as HBV and advised him to send a EDTA vacutainer, but in reality it is either a cervical swab or cytology fluid that needs to be sent. Well even after that with the mismatch in the bill, nobody really bothered to cross check. The outsourced test was for HBV-PCR since it was an EDTA vacutainer. The realization dawned only when the doctor called asking for the HPV-PCR report after two days. HPV is a virus associated with cervical cancer and HBV is a virus associated with hepatitis and liver cancer, two different clinical presentations and diagnoses. The matter is getting sorted out, and we hope not to have such disastrous events again.


What bothers me is the mechanical nature of work that happens in most of the hospitals. This happened with a hospital staff, a doctor, I cannot imagine the scenario if it was a patient. It does happen nevertheless. Nobody talks about it, the matter is hushed up or sorted out by us doctors or dealt by the patient relations section. I am talking about it because this kind of maleficence is something we all need to be aware of, as doctors and as patients. We need to always ensure that abbreviations or short forms are not used for drugs or tests during diagnosis and treatment. After all it is a matter of someone's life or death. There is a thin line, a very thin one. Thankfully this incident was something that could be handled, if it was something else I couldn't have forgiven myself for being a part of such a work team! It sends a shiver down my spine, every time I think of it. "Do No Harm" is sometimes easier said than done.

*PAP Smear- The Pap smear is a screening test for cervical cancer. Cells scraped from the opening of the cervix are examined under a microscope. The cervix is the lower part of the uterus (womb) that opens at the top of the vagina.

**PCR- The polymerase chain reaction (PCR) is a technology in molecular biology used to amplify a single copy or a few copies of a piece of DNA across several orders of magnitude, generating thousands to millions of copies of a particular DNA sequence. 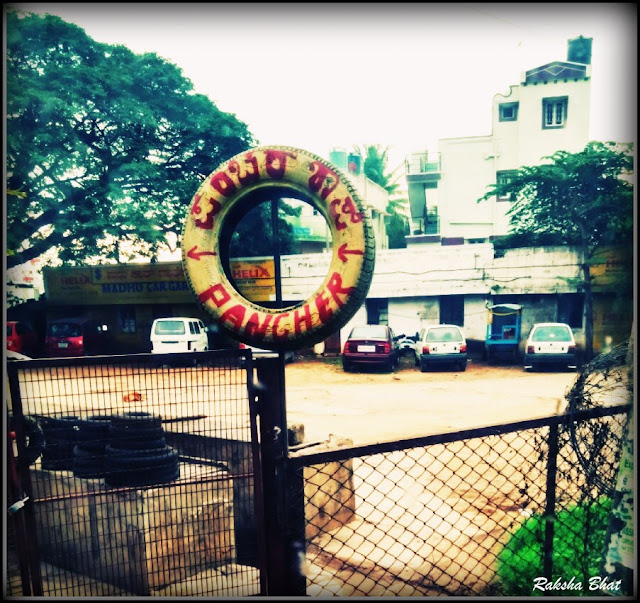 Namooru Bengalooru is a quirky place. While the roads and traffic are a woebegone issue, there are some amusing things one finds while travelling. Ever noticed these kind of signboards? I saw this one somewhere near Kengeri last week, I have never found one with the correct spelling until now. I call this Kannadizing English. Sakath alla :-D