You don’t dissect a book, you read it. That’s what I thought until the last few months. What changed my belief is the mediocrity of choice that I have been making of late. I am the sort of reader who does not, rather cannot judge a book even after reaching the last word. Somehow even the not so readable stuff catches my eye, but it has been ages since I read a genuinely impressive one and hence this venting out here. I desperately am in need of something more satiable especially after having read five or six which did not really reach the mark. Recommendations therefore are welcome.
If you do not know what is bad you cannot appreciate what is good so they say, but on what criteria do you call a book ‘bad’. Simply because you do not connect to it? If that’s the case Mills and Boons or the Twilight series which never made it to my book shelf may fit this definition, and all those people in this world who favour mundane romanticism will have to shun me out then. Talking about  favourites, why do you call a book ‘good’? Just because you read it at a go? I could do that with many, and Harry Potter tops my list. But then there are people who consider it nothing but a goof up of fantasy, just lamely popular. An opinion which comes from their own right. It’s all pretty relative.
Books according to me are like people, they come in sorts and shades. There are books you do not mind reading and rereading all through your life for some strange reasons. There are books with stories someone used to read to you during bed time. There are books which are gifts, you read them for that emotional connection. There are books which are reflections of the life you live. There are books which are more than friends. There are books you like because everyone does, there are books you dislike because everyone does! And there are books which are just there, you do not know why and how they made it to the shelf! Something what I am currently going through :-)
Posted by Raksha Bhat at 5:46 PM 1 comment:

” Ghattakke odi hoda” so folks in my native tell to this day say when some carefree bloke goes absconding from town. Meaning he ran away to the ‘Ghats’. Such is the furtiveness of the place. Add to this, every time I read Harry’s adventures in The Forbidden Forest, I could not picturise a better place. And time was, when in school we used to draw these zigzag lines on the India map all along the west coast. It was one of the easiest things to put up in the map drawing sessions during those geography classes. The tale does not stop here. For people like me who keep hopping from Bangalore to Mangalore or the other way for God knows how many times in their life this part of the journey is like the hardest level if you were playing a video game. Those curves and bends all along the road give a feeling of a snake slithering inside your stomach, a very wild one that too and every time you travel it just gets more! I managed one such yesterday and that explains why I am writing about it here.
On the greener side, there is something about the Western Ghats which makes it an alluring place, so much still remains unknown for all its good. There is a certain sweet rasp in its air which captures all your attention. And if it rains, it just adds to the magic. I realized it more when the bus managed to pass through and reached the plain lands, then is when I started missing it. The nausea had settled down by then. The river flowing with all gush by the side, the little waterfalls here and there, the old rail tracks, the chirping birds which you barely manage to see, the animal friends who remain in hiding with a justified fear and things as simple as these can make you feel you are just a little tittle in this world.
For all the human intrusion that it has managed to survive like a hundred other forests on this globe have, for all the diverse flora and fauna that it has owned over the years despite it all everything is not hunky dory about this place. The new rail tracks, the widened and tarred roads, the plastic bottles, the wrecked cars by the side are proof enough. But who cares, as long as it is safely commutable if you are travelling ”Oh the ghat roads are better these days, see until the next rain“ so many of us opine. Period. And we of all the living for the sake of saving our ass speak of conservation, evolution and development. What nonsense. The clock never zeroes, nature never revolts. But it has its way, none of our territory that is. Nothing better than the Western Ghats to give you that feeling.
-R.
Posted by Raksha Bhat at 3:03 PM No comments:

"You have a thing for it" a friend of mine mentioned this during one of those tension filled conversations I had with him before my sessional exams this week, well he was nice and generous enough to boost me up. And I took it very seriously, better late than never or so we all have been taught and I thought. I was speeding at twenty two knots  after that with my reading, more so messing up with my textbooks and notes in all the time I could get amidst all the lab and thesis work.This does not qualify as an excuse or a complaint, the important clause of the current status of my life being my post graduation.What remains as a question is how well I have fared, and I bet whoever reads the kind of stuff I have written will go back and read Kuby's for all the immunology I have discovered and created this time in my answer sheet.

Immunity is complex, literally. I realized this while trying to understand its basic concepts. It reminds me of the absurd things that I am allergic to- mosquito bites, cucumbers, eggs, lemons, detergents and pollen. You name it I have it. Some self proclaimed allergens like bananas and lack of time sense in fact top my list. I was a difficult kid because of all this, my folks know this well. Those wheezing and dyspnoeic attacks with every change in the weather, how my mother turned into my pillow during those nights, how my father ran behind me for that one dose of syrup all throughout the day and that blue inhaler in my school bag are some strongly immunogenic things ingrained in my memory cells. Thank God, I am more immune now. I practically had a thing for it, a difficult one that too, and that is one of the reasons I have to understand what infection and immunity is all about.  We are more gifted than we actually know when it comes to health, not many appreciate this fact and not many get a chance to learn everything about it.

Learning immunology made me worry all the more. Just when I thought I had figured it all out, the circuits of those many cells and their mediators that form the immune army of our body confused me so much so that I have gone saying "T cell, B cell, oh what the hell !" more often than praying or studying or whatever I could in the last few days. Meanwhile to sensitize me more one medically boneheaded acquaintance had to say this "Microbiologists are Urine and Stool Doctors" All I gotta tell that someone who matters not anything more than the neither of the two samples to me "Oh crap! Please do not piss me off !" ;-)
I have 'Immunology' to deal with.
-R.
Posted by Raksha Bhat at 11:37 PM 2 comments:


A tree asked me “Wondered what does it take to grow?”
A seed,a little rain and some sunlight is all what I know
With a baffle of smile he spoke his heart when I said so
To ask again “Heard of flood and famine,all that woe?”
I looked at the soil beneath my feet, a drop untouched
I looked at the sky for a cloud, scorched and clutched
When I found a poor bird on its branch tightly perched
She came flying, for a small nest is what she searched
With a love so unbound the tree then into its home grew
Over seasons of life, over all those rainstorms that blew
Only to teach to give a part of self is to spring up anew
But alas we men who can grow up like that are only few
-R-

Truth- From A Doctor's Angle

Enough said, enough more than done. Before our attention shifts to another hard hitting truth this Sunday this post of mine is here. It was long due. Being a doctor I could have obviously flared up after watching that episode on our health care system. But this was something which most of us Indian doctors already know but unfortunately do nothing about it.  Most of us in the medical fraternity are of the opinion that it was purely an one sided perspective, the research team did a disappointing homework and things like that. I disagree, let us not forget that when it comes to such issues emotions mask all practicality and rational thinking. Debates and discussions will continue as usual, until the fire dies down.
Aamir you said that you may be refused treatment here in India from now on, well I just want to let you know that you can visit me anytime;-) I am not writing a hate letter or suing you in the court. Blaming someone for creating a problem, that’s okay but blaming someone for bringing up an issue, now that’s utter hideousness. But there is more to the current situation, more that we all ought  to know about what went wrong in all the ‘India Shining’ we believe in or our leaders think they are up to. I could have hosted another show but for the Aamir that I am not, and this blog being mine I present my take on it here. There was no other way that I found better to explain it, sometimes talking isn’t really enough.
IN INDIA

LONG AGO
THE PATIENTS 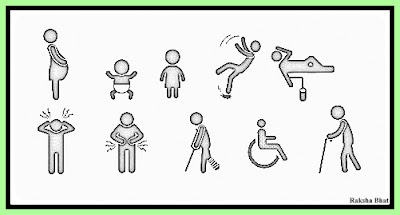 FROM NOT SO LONG AGO
THE PATIENTS
THTH
th 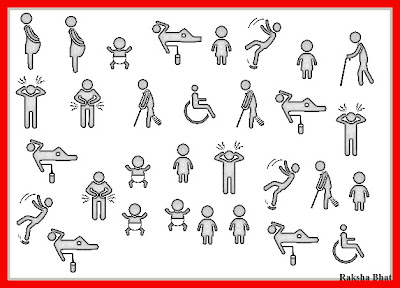 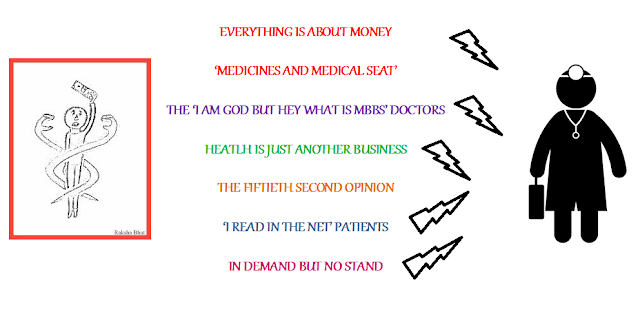 The picture is larger than it is made, larger than it appears. Before we talk about the system, let us not forget that we are the ones who make it. Doctors are facing this and living with this as much as patients, sometimes even more. There is a long way that needs to be set right before we go. Good doctors will prevail in this country as much as truth only then. And this one is just from a doctor's angle :-)
-R.
Posted by Raksha Bhat at 11:24 AM 3 comments: