Shoes of the Dead - Book Review 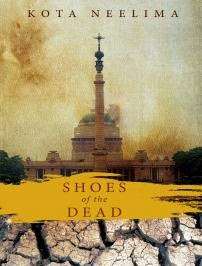 Politics, journalism and everything between the two, well that is today’s India for you. Kota Neelima’s Shoes of the Dead gives a remarkable insight into what has become of us today, we as a nation - a complete breakdown. What the book captures is the unheard rural issues of farmer debts and suicides, things which do not make to the prime time news. While Gangiri could do that, the end of chapter twenty two tells us until when. It hits the conscience. Farmers and their families, bank officers, local leaders, politicians and journalists- the detailing of the circumstances and characters although very elaborate is very much needed to make the reader realize what the ground situation in the villages is, it very much reflects the extensive research behind this book. There are parts such as these which put me to thought:

How true is that! People tend to get out of the mass ignorance and fight for the right but only when the wrong happens to them. To change the system first we need to get into the system, there is no waiting for that to happen. And that’s what the book tells us, to do the right at the right time in the right way. Then there are instances as close to real, where Keyur, a politician because he was born to one speaks like this in a press meet:

“People believe we will make better leaders because we are born into political families into power. They know we can handle it better. And we have”

Really? This speaks of the many in power right now in our country, arrogant as much as ignorant. Our maybe politicians analyze people better, or else the latter wouldn’t be at the receiving end. The role of journalists is well portrayed too, especially Nazar. Things that happen in the media, how news becomes breaking news and why. The complexities of governance are enlightening but deeply saddening. The ones who make it to the system are consumed by the system unfortunately. So where do we all stand as India, a nation, a very scary thought, ‘Bharath Nirmaan’ and all the glorified concepts apart.

A commoner better pick such books up from a library or book store because until one is aware there is no thinking about it, and doing something about it is a farfetched idea. The book isn’t a thriller, a self help book, a romantic story or a fantasy fiction. The genre is different, it is reality. Well we do not read such books in detail often and that’s the depressing truth. Principles and power do not go together, so do politicians and people in a bad democracy. There is a lot to avoid, to learn, to change, to act or else we are not far from becoming one. In this direction, the book is one good attempt .