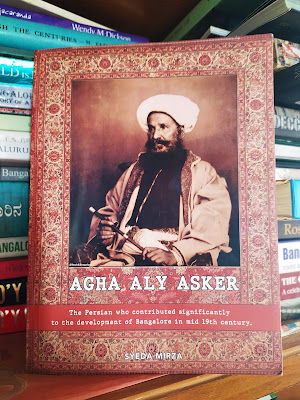 -The Persian who contributed significantly to

the development of Bangalore in mid 19th century 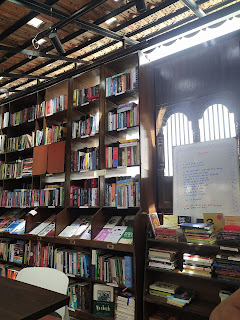 Finding a book on Bangalore and its people is a gratifying experience by itself. After a lot of research, visits to the libraries & bookstores and talks with fellow city dwellers if you are lucky you may find one, if luckier you may find an author signed copy like I did. Thank you Rehana Mohammed Shakir's Pet Therapy & Surrogate Pet Programme for guiding me to Champaca a well curated book café which left the Bangalore reader in me impressed.

India has always been a melting pot of civilization. If one were to ask for a quintessential example for this statement, our city of Bangalore is the best to cite. A side lane on Cunningham Road connecting to the Miller’s Road bears the name of a Bangalorean by choice and love for his karmabhumi, Agha Aly Asker the founding father of the Persian legacy in the city. His contribution to the city of Bangalore and Mysore State during that period is incredible and forms an important part of our city’s rich legacy. 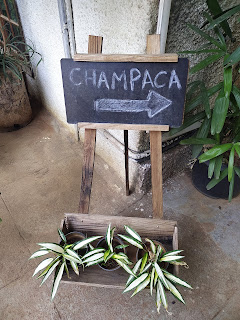 As a 16-year-old boy of Turkic origin, Agha Aly Asker left is hometown of Shiraz in Persia and came to Bangalore in 1824 as a horse trader and became more. The book initially speaks of the culture and the landscapes of his hometown. Shiraz is beautifully described as a land of mystics, poets and gardens; rightfully called ‘The City of Roses And Nightingales’. With chai khaneks and bazars, horse races and gymkhanas, carpets and chandeliers, architectures and societal structures, delicacies and cuisines, manners and upbringing, religion and culture; the author has not left one detail untouched. One is left mesmerized reading the first few chapters.

However, as they say destiny is what you make it, Agha Aly Asker had a vision for his future in the then land of Hind and Ingleesi. His courage to pursue, the adventures to reach the subcontinent through the deserts and the seas is described through and through, the reader gets drifted to those times. Along with being an equine connoisseur and contributing to the horse racing map of the city Agha Aly Asker has built many iconic colonial bungalows at the request of Sir Mark Cubbon who had a paternal affection for this young immigrant who came to the city crossing Bushehr, Mangalore, Puttur, Hasan, Adichunchanagiri only because of his love for horses.

Now from horses to houses, the list of houses built and owned by Agha Aly Asker is mind boggling, from Raj Bhavan to Balabrooie. He also played an important role in the Mysore State’s persistence of securing the Wodeyar gadi for Krishnaraja Wadeyar III adopted son Chamaraja, preventing the British plan of annexing Mysore. The list of presents that reached Queen Victoria speaks of the richness of Mysore State and only a keen observer who had a taste for such finesse could come up with such precious tokens to get things going. Such incidents reflect his relentless love for his adopted country despite his trades with the British. His sense of justness to the locals and natives deserves great respect and admiration.

The author also writes about his descendants and the other stalwarts associated with him like Sir Mark Cubbon, Sir Mirza Ismail, the Wodeyars and his comradeship with them. His kindness, honour, justice and love towards the family and friends that he made here in Bangalore is captured in its truest essence in the book with multiple references and documents. The words in this book carry the power and fragrance of his favourite pink rose ‘Gul-e-Mohammadi’ and that is the beauty of his story, a legacy that deserves all the love he has left behind for this world. 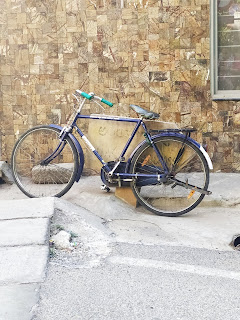 After getting this book we walked down the Agha Ali Asker Road. Coincidentally I spotted a fading yellow board in one of the crossroads, one can hardly read the name and number of the cross on it. While I was assuring myself that the road is the one, a cyclist stopped by and left his cycle leaning on the board and went about his work. The name supports a Bangalorean even after a century, and that was the moment when I felt that there must be something transcendental about him.

I wish we Bangaloreans remembered and respected the people who made us, a little more🙏🙂

A few quotes from the book:

The true journey is not crossing the desert or covering great distances by sea, it is arriving at a point outside ordinary experience, where the savour of the moment suffuses all the contours of the inner life.-Kevin Rushby