This is a *story of a simple man who lived in a remote village called Thingalady in the outskirts of Puttur,a small town of South Canara.He had a huge arecanut farm but it hardly brought any yield, there was nothing else to support his family either.And being a father of nine kids he was struggling hard to make ends meet.The children were very young and he had to give his best to keep them happy which he did.
Life was quite monotonous when his little ones were growing up,especially during the times of transition.One after the other they left home for studies,work and reasons else.He was content but over years he had drilled an emptiness for himself.He had no grave complaints as such,all he longed was for a friend.The good lord heard his prayers and one fine day the angel of his life arrived.She came wrapped in an old and shabby cloth,when he saw her for the first time he said very intuitionally to his family members"Let's keep her".
He built a special home for her near the garden and food followed sumptuously.From rusks to papayas he gave her his favorites always.Late mornings were meant for some water play and every time he splashed a bucket of water right on her face she yelled with joy."Dare you howl at me like that!" he would say just to provoke her and throw some water again.In the evenings he and his friend would walk amidst the mango, cashew nut and jack fruit trees in the hillocks.They would sit watching the sunset and those were the best moments of his day.He would then talk all that he wanted to with her and she would listen attentively.During one such conversation he told her"You know what!You are nothing short of a miracle in my life because there is nobody else who has time for me like you do!I am sure you will never leave me and go!”And like every time she nodded her head in agreement.They had made a pact.
Many years passed by and he noticed she was becoming very much like him,thin and frail.Her skin sagged while his wrinkles deepened,he had reached his eighties.When everyone in the house was busy with their chores he made sure that he gave her an extra meal daily.Over a period of time age hit hard on him too,the morning baths and evening walks stopped.He was forced to stay indoors unfortunately.While he moaned in pain,she would refuse food and spend her time walking restlessly and wailing all day after hearing him.
On a fateful dusk he was lying on his bed surrounded by his kith and kin.The air churned by the swirling fan moved out of the window.She stood near the rails watching him with all the love she had for him.He was gasping for breath and suddenly his chest stopped moving.There was a mourning silence.It was all over.He had left.She dropped a tear,a very unusual sight.
She sat in a corner watching him sleep in peace.Friends and family who rarely enquired about him or his health made their last visit after which his children carried him to the hillock for the last rites.A hundred men walked together,she followed them quietly.He was laid on the pyre and his children walked around him paying their last respects.She did the same too, exactly in the same manner.The flames were lit, she watched the fire reach sky high.She wondered where he would be going next.The warmth and the light seemed like a beacon to her.It reminder her of the pact.She was always told not to leave him and go.She saw the smoke go behind the trees and fields.She followed it and ran into the darkness,never to return. 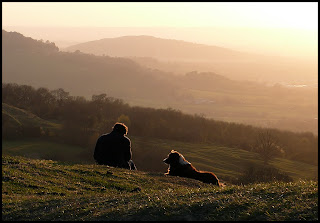 *The story is based on the life of my grandfather and his darling pet called PINKY.We have had no clue as to her whereabouts since the day he passed away.The family believes she left us because he did.She lived for a long and good sixteen years with him.She was one of the most wondrous part of his life.It has been more than ten years now since they left.We miss them both.Sometimes even the hardest of goodbyes feel like a strange miracle.
The best miracles of our lives are not the ones which strike us like a thunderbolt all of a sudden.If we look closely they are the ones we live with right now.They are around and within us.We can find it in a stranger who offered a little help or in a pauper who returned a fallen purse.We can see it gleaming in our parent's eyes when we make them proud.We can feel it when we are sure that we have at least one unconditional friend.A real miracle is when someone holds us when we fall but we least expected him to do that,it is when someone follows our dreams without a second thought,it is when we let go something we like the most or when we give someone some love benevolently without asking for anything in return.
Miracles do not occur when God realizes and feels like giving us a change on a blessed day, they happen when we make them happen.Everything happens for a reason and if it is above our interpretation we choose to call it a miracle.

Remember a caterpillar never looks any close to a butterfly but ends up flying as one,a little miracle indeed:-)
Regards
Raksha Bhat
Get Your Story Published In The Chicken Soup For The Indian Soul-A Book Of Miracles at Blogadda
Posted by Raksha Bhat at 11:30 AM

PS: Talking of Miracles, wish someone gifts me a beagle pup! :-)

Hmm a very good one .. miracles do happen in life we jsut need to open our eyes to see them

@Rajesh: Glad to see you here Rajesh and thank you for liking!

so very true, u have penned it beautifully. i loved each line.
good luck for ur story :)

PS- ur title was very apt for my story too. do read it and let me know!

"Everything happens for a reason and if it is above our interpretation we choose to call it a miracle"...Perfectly said!!!

Miracle cannot be big or small...even small little things in our day to day life can be called miracle which gives happiness beyond the measures...
:)

Hi
landed on your site via the Indiblogger akshay patra link

will keep coming back to read

keep up the tempo

Nice one ,there are somethings in life for which there are no answers..

@Beyond Horizon:little things matter the most don't they?:)

@prashant:Thank you and welcome here:)

@The wild: Hey long time:)how are you doing?:) ..thanks for liking the post:)

Such a touching story, loved it
All the best