And before I continue...
Disclaimer: The author does not hate football and she is no fan either, sorry if her ill knowledge brushes more than three quarters of the worlds hearts.This article is solely out of the effects which the game is right now causing in and around her life, both good and bad funny.She hereby requests the reader to read and kick it away as lightly as possible.
Some questions have popped out of my very curious mind, I have had my share of inescapable encounters during this season, and some things have made me laugh along with the game.I am feeling feverish too!!!
Firstly I do not have any favorite team or player,I happen to know a few names because I get to hear and read about them,frankly some names are beyond my capability of pronunciations.All that I know is that there is the ball behind which all the guys run around to make the goal and then far alone in his den is a guy called the goal keeper ,whose prime duty is not to let this happen,and finally whichever team makes the higher number of goals wins the game.Sounds simple.My apologies,I choose not to know more.
Evenings are usually spent these days at home watching the matches and my ears have the pleasure of hearing the strange and loud bee hum like noise from the stadium, courtesy brother. Many of the crowd’s favourites are not faring well, but then the game is the IT thing happening .And when it is goal time wherever and whatever each one of us is doing all of us rush in front of the television and screech “GOAAAAAAAL” irrespective of the player or the team and he especially at the top of his voice.
Last week he was on a beat around the town searching for a jersey of his favorite team,but before he reached the place where he could get it,that some shop had run out of stock,Paapa kid came back home dejected and disappointed.It was hard to see his face with a smile lost.
The mother is also not far behind,I know she is a cricket fanatic,Kapil Dev being her all time favourite and now her love for football is coming to light,seeing these guys play ”This?This?This is football?Gone are the days of Pele and Maradona!” she remarks and makes her trademark head scratch and walks in back to the kitchen.A happy factor for her this time is her favourite, the lady Shakira with her swirls and swings singing” Waka waka eh eh”, what if we do not make it to the list of teams playing for the cup, we definitely have a signature dance step to our credit, the best greet gesture of the world.Take pride Indians, little things also make us happy.
A three year old girl lives in the opposite apartment who comes knocking at the door sometimes to play with me and guess what I had in store a few days back.She came like always and asked me to put this song on the laptop and there she was ready with folded hands telling”Akka akka, Wakka wakka”.I was too surprised to deny her partnership offer and then we both just swayed along.
There is an another video of the animals playing football.The lions,elephants,giraffe,ostrich,stags,bulls,meerkats,hippos, tortoise and many more.The enjoyment with which they play,very impressive. A lot of work and patience would have gone behind capturing and making those scenes. The monkey does make an expressive referee ;)
So as long as this fever lasts, I will be watching every match possible and singing everyday...
"Tsamina mina… Waka waka eh eh…Tsamina mina eh eh...This time for Africa!" 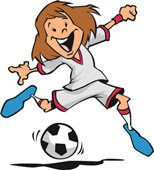 heeh!
you surely are not a fan:)

cheers!
and thanks for following mebloggy:D!!