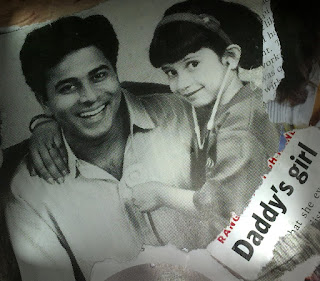 This was completely new for him.A fatherhood for the first time,he was few months through and like all fathers he was too excited and getting ready to do anything to give a perfect life for his child, his new bundle of joy.All babies love to cry,this one invariably did.But she was a little different,just that she never stopped.


One day after the usual work at office he returned home,as he was about to rest on the chair to read the day’s newspaper he heard his daughter crying,everyone was running around in the house to get things to please her.From milk to gripe water,toys and lullabies everything tried but in vain.She was inconsolable.It was his turn now,he got up from his chair,walked towards the cradle and not knowing what to do gave her a perplexed look .He picked her up in his arms and ran outside the house.He walked on the roads showing her the sky,the trees,the shops,the people and the whole new world.He did not get her in until she stopped crying.After a check up with the doctor later she was found to have a mild ear infection which was causing all the pain and the cry,she could get alright.Some relief for him indeed.


This is My Dad for you, amusingly loving and weirdly possessive.All Dads are! Aren’t they? :)


Till date, he has got all my syrups and tablets right on time in exact dose when I am ill, and sometimes even when I am perfectly fine he comes with them knocking my room door ready to stuff them in my mouth, just to make sure that I do not get ill! Mom says he could not bear the sight of blood while the goldsmith was piercing my ears, he had run a kilometre away and returned only after it was done.There are more funny incidents to cite, his typical ‘Dad’dish things and moments!!!


He got me the prettiest dolls,the yummiest chocolates.He got me into the best of schools.He taught me to ride the cycle without letting me fall down.He taught me to read books.He loves to hear me say "Appa,am studying";).He gave me everything that I wanted even before I thought of asking him.There were times during those revolting childhood and teenage days when he refused my unreasonable demands,I realize now that it was for my good.He would get angry seeing me and brother fighting,but the hilarious part was when one out of the ten times we would get some little beating,the rest of the times he locked himself in the room with Mr.Bro sitting up on his shoulders.He refused to put him down until he said sorry or stopped crying;and at the end of it all Mr.Dad would end up crying out of anger!God knows what the punishment was and meant for whom!


Three decades and more, working in the same place relentlessly only to see his family happy.He knows not of his wants and needs.I have never seen him go out with his friends or buy anything for himself.His children and wife are his relatives and friends, they mean the world to him.


He is far out of town since the past three years, thanks to his job.He can work insanely for a stretch of twelve hours,he might forget to have lunch but will never forget to make six calls and speak with each of us at home during those twelve hours.I miss him,the Daddy’s girl that I am.And when I feel low I blink away those tears,tears not of joy or sorrow,tears that make me feel that someone is having a hard time out there only to make sure that I do not have to face any.

Like all fathers,he carries his responsibilities with pride.He supports me in every way he can and with him around every situation seems so under control.He dreams of a good life for his children, a life that he never wishes for himself.It takes a great deal of commitment and courage for such selfless love, and for me My Dad is a Champion in his own way.


I do not get to say it often or rather always get away without telling him how much I love him, for there are some relationships which are unconditional,absolutely no demands at all.He has taught me to give more than to ask for,to fight for my stand,to make my way where there is none,to live with dignity,to spread more than smiles,to love without reason.He believes his daughter will make him proud one day.And as life passes by,I only wish to play his role and take my turn to make him happy and give him all the love and life that he has missed which he rightfully deserves.

PS1: He often gets fondly jealous of all my guy friends..his another 'Dad'dish thing:P
PS2: I like it!;)

Thank you guys for reading and appreciating this:)
A Happy Fathers Day and many such good wishes to all the men who are proudly one,lets keep the spirit of gratitude and love for them through all our life:)

@Rajlakshmi: Hi,thank you for saying that and I am glad you liked this post as well:)