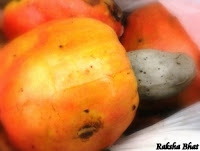 Kasargod is where my family roots are precisely.The landscape in and around this town bordering Northern Kerala and Karnataka is filled with cashew nut trees.This along with arecanut is one among the important crops of this region.Many of the households depend on it for their annual income.The colours of the fruit as in this picture does look appealing,but the issues that have been associated with its cultivation are nothing short of a tragedy.
I came across this news last night that the State Government of Karnataka has finally decided to impose a two month ban on a harmful pesticide called ENDOSULFAN.My mother went completely down the memory lane and started telling me how the residents of this area used to run outside the house when a helicopter passed in the sky.Little did they know that it was above them to shower white crystals of nothing but illness and suffering.It brought a mist of grief that would cover them for ages. 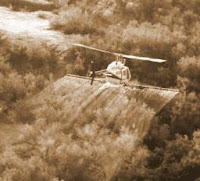 Way back between 1970s and 2000, endosulfan was aerially sprayed in this manner through many years over the cashew plantations.A bio accumulator by action,it is associated with a wide variety of problems like infertility,cancer,skin allergy,asthma,epilepsy,cerebral palsy,physical deformities and congenital malformations.It is disheartening to see children,men and women alike  ailing for no fault of theirs.Many organizations and people are fighting for this cause already.What everyone must understand that while rehabilitation and compensation is a part of the solution,the pesticide industry and the government are the only ones who can decide their fate.What is mockingly surprising is this pesticide has already been banned in 63 countries and India still continues to be its largest consumer!
It is enough late,I wonder why the ban here in Karnataka after these many years.What will happen after two months?Isn’t it a shame on our part when we let something like this kill our fellow human beings?Why does it take years to come to terms with a hard hitting fact?Of what use are our policies if they cannot save or make better lives?How difficult is it to make a sensible decision?Are we really developing?
We forget these questions in a blink because there are innumerable scams and scandals to laugh and talk about.And of course the world cup cricket matches will be soon on air to spend all our time.These campaigns and movements can always wait,there are many others who do it.How many of us do not think so?It is more than true that somewhere amidst all the progress in this country that we are proud of,we have actually stopped being humans.
Another truth that we all must know,it is easy to wake up someone who is asleep and make him get going but if he is ‘acting’ asleep no boulder falling on him can wake him up.And all of us belong to the latter category in  a hundred important issues.Ironical it may seem but in countless ways ours is a land of more than a billion scapegoats who refuse to decide their way of living by themselves.Guilt or accountability of any kind is for the administrators,none of the population’s business.While we are knowingly committing crimes and letting others do the same too,all we can ask each other is”So whats the score?”.

Here are a few links,do go through them to know about this prevailing poison and its grave affects:
-R.

JUST for your info or for others :)
state govt can't permanently ban any pesticide according to our constitutional norms. Mr. ICC president sharad pawar (god knows how much kick backs he/madam is getting) and the IIT graduate-world bank economist-environment minister Jairam Ramesh and our great honest PM- MMS must take action.
What can Yeddyurappa do- he is busy saving his chair- one appreciable fact of state govt is their encouragement for organic farming :)Almost all the vegetables or fruits in market are GM variety or artificially ripened. Hope people change their ways of farming and farming is given more importance.

Also you failed to thank our Shobha Akka who fought for it:D

So right Ban endosulphan . But we need to ban so many more pesticides and also educate people regarding the indiscriminate use of pesticide and popularize bio-pesticides.

@Arjun: This post is not pointing at the fallacies of any government in particular,state or central.It is a question to ourselves when we fail to notice something this grave.And also I have dropped a thank you to our energy minister's mailbox directly before writing this post:)If some good work is done,there shall be no second thought before appreciating.Thanks for reading.Your words are a lot pro the current administration in this state,they must be glad:)

@Team G Square: It is not just about one pesticide,yes there are many!Unfortunately all this is a big course of rules ans law:)I chose to write on this because of the town connection,my family hails from this place.The news bothered me.Thanks for reading:)

Great informative post Raksha...I don't know whether I should say its sad or too ignorant for such existence...coz even there are so many things already banned and its usage continues before million eyes

I thought that endosulfan was a recent phenomenon in the past 10 years or so ,but never knew it was from the 70's,its dishearteaning to see ppl suffering like this

I am not taking sides ,but Shobha Karandlaje did try her best and i see that some of that has finally taken fruits ,i would have hoped this would have been done much earlier

@raksha- i just shared some info and also expressed my frustrations through your blog :D

Surely a sad state of affair.
Our country though termed progressive is bogged down by so many such malpractices.

@The wild: This was a commendable measure,but wonder how long it can sustain!

@Arjun: I think thats the only thing we all are left with,frustration!Of course for different people and reasons:)

@Pooja: Yep,we know what is wrong,but the sadder part is we do not do the right!